You are here: Home / About
PreviousNext
12

Noor Energy 1 PSC will be implementing the 4th phase of Mohammed bin Rashid Solar Park, which is a 700MW CSP +250 MW PV Project. The Project will be the largest single-site concentrated solar power plant in the world. It has also witness a new world record of levelised cost of electricity at US $7.3 cents per kilowatt-hour; a cost level that competes with fossil fuel generated electricity without subsidy for reliable and dispatchable solar energy through the night. The technology used includes a combination of the world’s largest solar tower at 260 meters (100MW), parabolic trough concentrated solar power technologies to collect energy from the sun (600MW split in 200MW for each unit), and bifacial photovoltaic (250 MW).

The project supports the Dubai Clean Strategy to increase the share of clean energy at Dubai to 25% by 2030 as well as allowing a saving 2.4 Million tons of CO2.

The Dubai Electricity and Water Authority (DEWA) awarded a build-operate-transfer (BOT) contract for the 700MW Noor Energy 1 CSP plant to a consortium of ACWA Power and Shanghai Electric in September 2017. The contract included a 35-year power purchase agreement, under which DEWA will off-take electricity from the independent power producer (IPP) project at $7.30 cents per KWh, a price competitive with fossil fuel-based power generation. The ACWA-led consortium (49%) together with DEWA (51%) formed the project company Noor Energy 1 to design, build, and operate the plant, in the same year. DEWA and ACWA power signed an amendment to increase the plant’s generating capacity to 950MW by adding a 250MW PV facility, in November 2018. ACWA Power signed a co-operation agreement with ICBC, Shanghai Electric, and Abengoa for the 950MW solar power facility in the same month.

The Noor Energy 1 hybrid solar facility will comprise  a solar tower capable of generating 100MW, three sets of parabolic trough arrays of 200MW capacity each, and an array of PV solar panels of 250MW generating capacity. It will be one of the world’s first energy facilities to use a combination of three different solar power technologies. The solar tower, standing 260m-high at the center of the plant site, will also be the world’s tallest solar tower. The Noor Energy 1 solar complex will also possess energy storage capacity for 15 hours and be capable of delivering power 24 hours a day.

ACWA Power, with 24.99% equity stake in Noor Energy 1, will lead the project development. NOMAC, a subsidiary of ACWA Power, will be responsible for the operation and maintenance solar plant. Shanghai Electric is the engineering, procurement and construction (EPC) contractor, while ICBC is the financial partner for the project. Abengoa will be the key technology provider for the hybrid solar power facility. Advisian, a subsidiary of WorleyParsons, was appointed as the owner’s engineer for the Noor Energy 1 power plant, in July 2018. 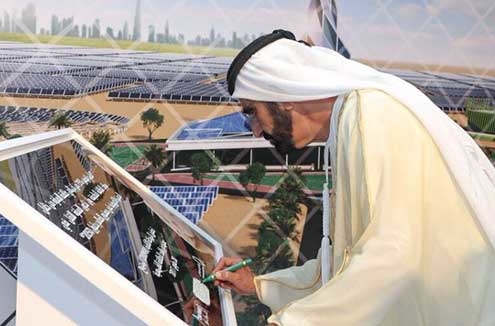 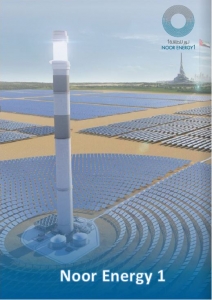 ACWA Power is the developer, investor and operator of power generation and desalinated water plants with 54 assets in operation, construction or advance development across 11 countries employing over 3,500 people with ~60% local employment. ACWA Power’s portfolio, with an investment value in excess of USD 45 billion, can generate 30 GW of power and produce over 5.3 million m3 /day of  desalinated water.

Dubai Electricity and Water Authority (DEWA) was formed on 1 January 1992 by a decree issued by the late Sheikh Maktoum bin Rashid Al Maktoum to take over and merge the Dubai Electricity Company and the Dubai Water Department that had been operation independently for several years until then. Both organizations were established in 1959 as government-supported bodies with the objectives of making available to the people of Dubai an adequate  and reliable supply of electricity and water. Dewa employs a workforce of over 10,000 employees and provides over 725,000 customers with electricity and water.

As of year end 2014 (where statistical data is available) DEWA has an installed energy capacity of 10 GW. As of date DEWA is rated BBB/Baa1 by S&P/Moody’s

Silk Road Fund Co., Ltd is a medium to long term investment fund established in December 2014 in Beijing. As an important vehicle to implement China’s initiative of the Silk Road Economic Belt and 21st Century Maritime Silk Road (Belt and Road initiative), the Fund makes outbound investment in diverse geographic areas outside in China. The committed funding by the Chinese government is USD 40 Billion, with an initial disbursement of USD 10 Billion. With openness, inclusiveness, and mutual benefit as its core values, the Fund is committed to providing financial support to cross-broader economic and trade cooperation and connectivity.