You are here: Home / Central Tower

The basic principle of the plant is to convert primary solar energy into electrical energy using a field of heliostats, a solar receiver located at the top of a tower in the center of the solar field, a system for storing the thermal energy, with a generation capacity of 7 hours based on molten nitrate salt, and a steam cycle with a turbo-generator with a rated capacity of power output 100 MW in the normal operation point. A simplified version of the basic operating principle behind the project is shown below:

At the receiver outlet, the hot salts (565ºC) enter the Outlet Tank, which acts like a buffer for the hot salt system.
From the receiver’s outlet tank, the hot salts descend from the tower at 565ºC to the hot salt tank, where they are stored. From this tank, the circulation pump pumps the flow required for steam generation, which consists of a group of salt/water-steam heat exchangers.

The salts act as the means of heat transfer between the solar field and the steam cycle, heating up in the receiver, and cooling when the superheated steam is generated in the plant’s exchangers. The steam produced this way is sent to the turbine, where it expands, driving the electrical generator. The electrical energy produced is later delivered to the electrical network.

On cloudy days, and at nights, the operation of the solar field stops, and the discharging of the storage system begins. The receiver’s salt circulation pump stops, the receiver empties, and the salt circulation pump is maintained, which is responsible for supplying salt to the steam generator.
To keep the salt from solidifying, the Plant includes electric resistance elements submerged in the salt storage tanks and a pipe tracing system and salt pipe accessories. 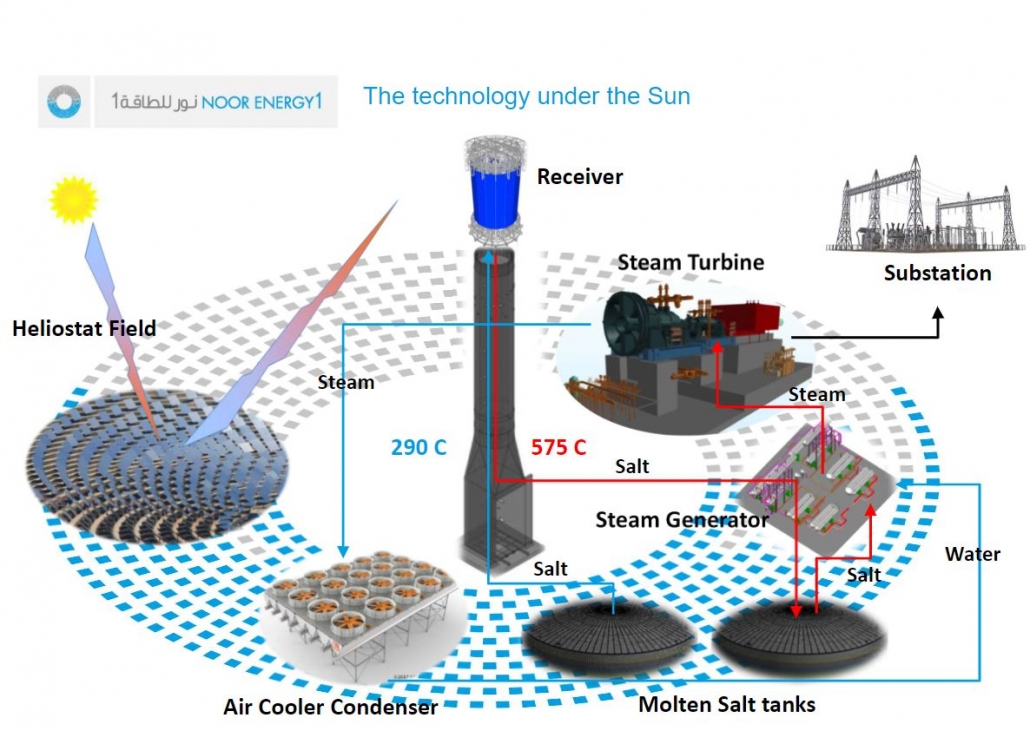